​Be sure to also check out my new book, The Folklore & Haunted Locations Guide: New York, available on Amazon in eBook and Paperback!!

Location Address:  Lincoln Center Campus, Rose Hill Campus & Westchester Campus, The Bronx, New York, 10458
Fordham University in The Bronx, New York was founded in 1841 by the Catholic Diocese of New York, and is renowned for being the oldest university in the northeastern United States. Students report witnessing apparitions and experiencing other unexplained paranormal activity in the Administration Office, Collins Auditorium, Finlay Hall, Hughes Hall, Keating Hall, Martyr's Court, and O'Hare Hall. There are believed to be dozens of different spirits that haunt the campus, which was constructed over the site of an old hospital. A series of underground tunnels were once used to connect different areas of the hospital, and students visiting these underground areas report feeling the presence of an unseen entity, as well as feelings of extreme fear or nausea. Keating Hall is said to be the most active location on campus due to the fact that it was allegedly built over the hospital's morgue. Students at Keating Hall report witnessing unidentified apparitions and shadow figures, especially in the basement area, and many have also claimed to witness chairs and other objects being thrown around by an unseen entity. Other paranormal activity has been reported throughout Fordham University's 85-acre campus, such as cold spots, apparitions, and disembodied voices.
User Comments & Submissions
​​Leave a comment below, submit your own scary story about this location, attach a picture, or share a video.

Coordinates:  40.846481°, -73.834856°
Location Address:  ​​1730-1740 Mulford Avenue, The Bronx, New York, 10461
Hazel Towers is an 18-story apartment building located in the Pelham Bay neighborhood of The Bronx, New York. Residents at Hazel Towers report witnessing orbs and shadow figures, as well as experiencing other paranormal phenomena such as cold spots, disembodied voices, objects moving by themselves, and unexplained feelings of sadness and paranoia that subside upon leaving the location. Although many claim to witness spirits and apparitions at Hazel Towers, the reason for their presence is unknown.
User Comments & Submissions
​​Leave a comment below, submit your own scary story about this location, attach a picture, or share a video. 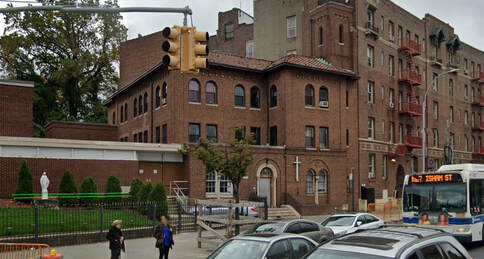 Coordinates:  40.853677°, -73.912329°
Location Address:  ​​1940 Dr. Martin Luther King Jr Boulevard, The Bronx, New York, 10453
Holy Spirit School in The Bronx, New York is said to be haunted by the spirit of a former nun who died under mysterious circumstances. Students claim to encounter the nun's spirit wandering the hallways during and after school hours. Although many have claimed to witness this spectral nun, the reason for her presence is unknown, and very little evidence can be found regarding this alleged haunting.
User Comments & Submissions
​​Leave a comment below, submit your own scary story about this location, attach a picture, or share a video.