Coordinates:  42.352831°, -83.062174°
Location Address:  4421 Woodward Ave, Detroit, Michigan, 48201
The David Whitney House in Detroit, Michigan was constructed in 1894 by a man named David Whitney, and now serves as an upscale restaurant called The Whitney. The 52-room mansion includes 10 bathrooms and 20 fireplaces, and spans over 21,000 square feet. Reports of paranormal activity at the location were first recorded in the mid 1980's when the building was being remodeled, at which point workers began to tell stories of encountering apparitions and experiencing other strange phenomena, such as objects moving by themselves, doors being opened and slammed shut by an unseen entity, and sudden cold spots or temperature fluctuations. Patrons and employees at The Whitney often report encountering the ghost of a man believed to be David Whitney, who passed away in the home in 1900, as well as another spirit believed to be Mr. Whitney's wife Sarah, who also passed away in the home in 1917. The David Whitney House was added to the National Register of Historic Places in 1972, and was featured on an episode of the popular television show, Ghost Hunters in August of 2016.

Coordinates:  42.359420°, -83.064576°
Location Address:  5200 Woodward Ave, Detroit, Michigan, 48202
The Detroit Institute of Arts in Detroit, Michigan was constructed in 1927 as a museum, and is believed by many patrons and employees to be haunted. Security officers working at the museum late at night often report hearing the sounds of disembodied footsteps, loud thuds, and other strange noises coming from seemingly vacant areas. Others claim to witness shadowy figures and apparitions that appear to follow guards on their patrols through the building, while also experiencing strong feelings of being watched. ​Much of the alleged paranormal activity at the museum is rumored to stem from a mysterious statue in one of the African art exhibits known as The Nail Figure, which depicts a man being painfully impaled by nails and spikes. According to one urban legend, The Nail Figure is even said to dance and move around the exhibit freely at night, however these claims are widely dismissed as being fictitious.

Coordinates:  42.341699°, -83.060297°
Location Address:  500 Temple Street, Detroit, Michigan, 48201
The Detroit Masonic Temple in Detroit, Michigan was constructed in 1920. It serves as home to a number of Masonic organizations, and is renowned as being the world's largest Masonic temple. The location is said to be haunted by the spirit of its original founder, George D. Mason, who passed away on June 3, 1948, and whose apparition is often seen by temple members along with a number of other unidentified male specters. Members of the temple also report hearing the sounds of disembodied voices and whispers, in addition to experiencing other unexplained paranormal phenomena, such as doors opening or slamming shut by themselves, and feelings of uneasiness that subside upon leaving the location. The Detroit Masonic Temple was added to the National Register of Historic Places in November of 1980.

Coordinates:  42.346591°, -83.017865°
Location Address:  1200 Elmwood Street, Detroit, Michigan, 48207
Elmwood Cemetery in Detroit was established in 1846, and is known for being the oldest operating cemetery in the state of Michigan. It was added to the National Register of Historic Places in December of 1982, and is the final resting place of many of Detroit's founding settlers and politicians, and other prominent historical figures. Those visiting the old burial ground at night report witnessing strange glowing orbs and flashing lights, as well as encountering the spirits of the men and women buried there.

Coordinates:  42.329331°, -83.052923°
Location Address:  525 W. Lafayette Boulevard, Detroit, Michigan, 48226
The 27-story Fort Shelby Hotel in Detroit, Michigan was constructed in 1917. It remained open until 1973, at which point it was closed and left abandoned for over thirty years, and was frequently occupied by drifters or other homeless people in need of shelter. During this time one of the pipes in the basement burst, rapidly filling the area with dense sewage and trapping a homeless man inside. According to police reports, the unidentified man's body wasn't found until several years after his death, when neighboring businesses began to complain of a foul stench emanating from the old Fort Shelby Hotel. Ever since, the man's spirit has been sighted by pedestrians walking in the alleyways surrounding the old building, and over the years he was given the nickname, Al. The Fort Shelby Hotel was renovated in 2007 and reopened in December of 2008 as the Double Tree Guest Suites by Hilton Detroit Downtown - Fort Shelby, where many still report encountering Al's apparition wandering the hallways and lobby at night. Guests staying at the hotel have also reported hearing the sounds of disembodied footsteps and other strange noises, as well as witnessing doors being opened and closed by an unseen entity, and feeling a strange presence. The Fort Shelby Hotel was added to the National Register of Historic Places in November of 1983.

Coordinates:  42.299662°, -83.095974°
Location Address:  6325 W. Jefferson Ave, Detroit, Michigan,
Ft. Wayne in Detroit, Michigan was constructed between 1842 and 1851, and was used as an active military base until the early 1970's. The location is said to be haunted by the spirits of former soldiers who were killed during the American Civil War, whose apparitions are frequently seen by visiting tourists and sightseers. The 96 acres of land surrounding Ft. Wayne was also excavated during the early 1900's where numerous Native American burial sites were discovered, which many paranormal experts believe may contribute to the supernatural phenomena in the area. In addition to encountering apparitions and shadow figures, tourists at Ft. Wayne report hearing the sounds of disembodied footsteps and voices, as if a conversation is taking place nearby. Others also claim to witness doors opening and closing by themselves, and objects being moved or somehow misplaced by an unseen entity. Ft. Wayne was added to the National Register of Historic Places in May of 1971, and hosts public ghost tours during the Halloween season. 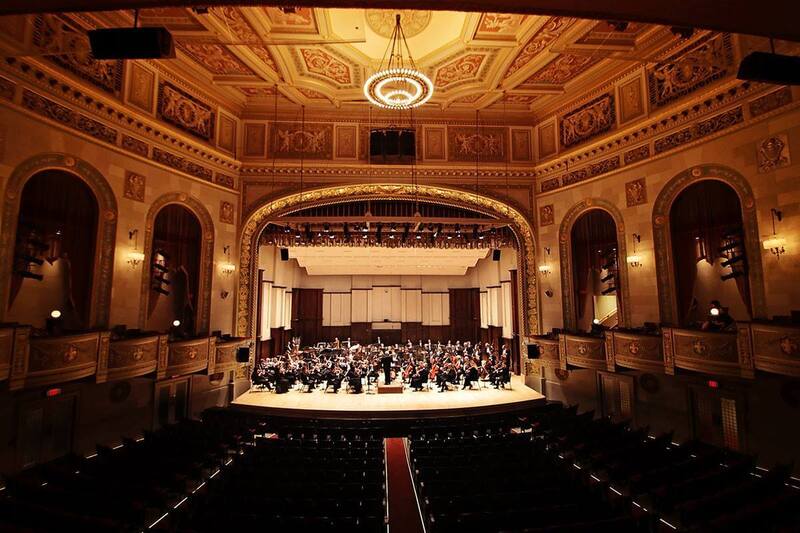 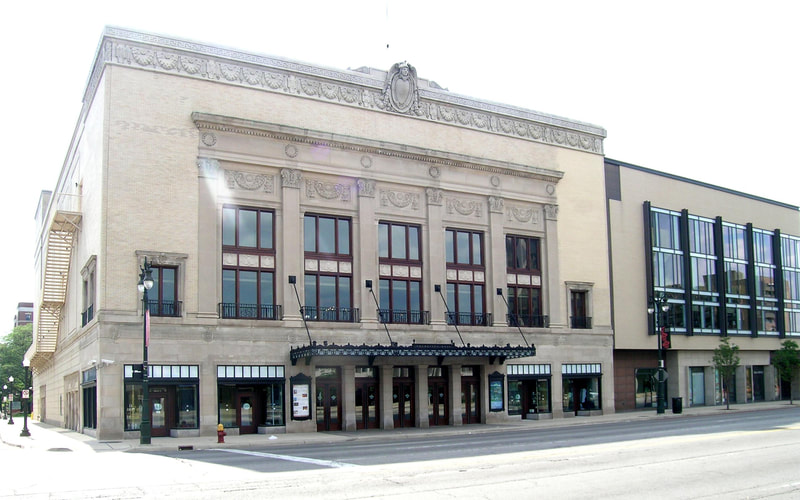 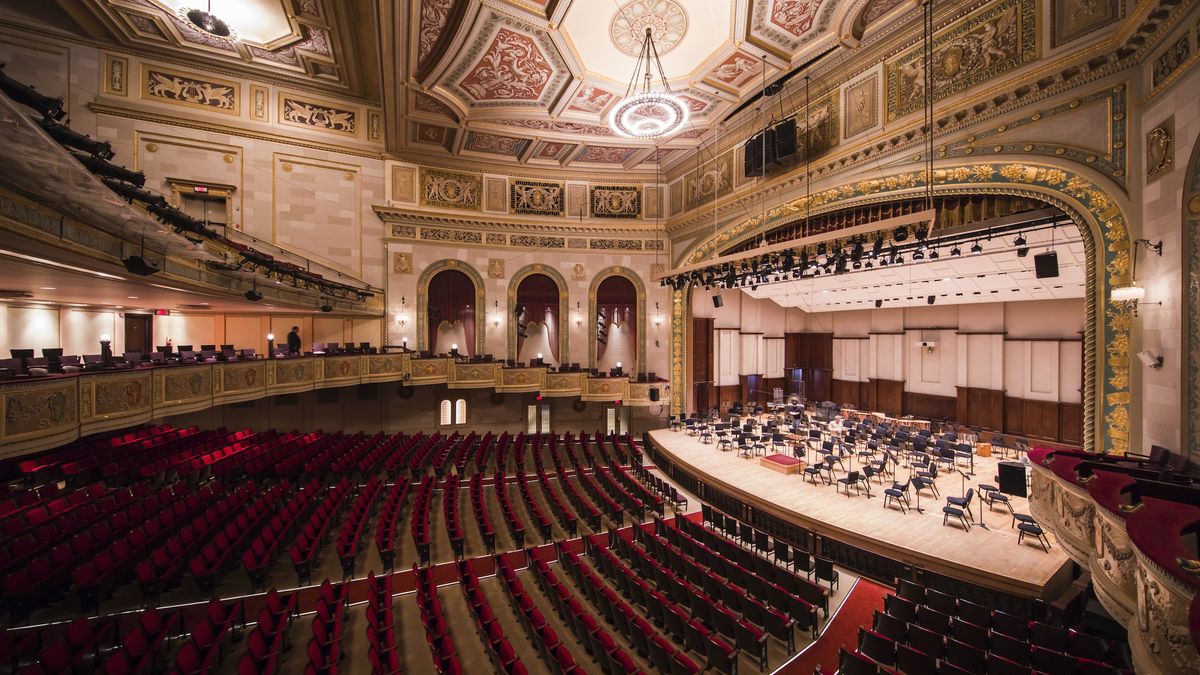 Coordinates:  42.348908°, -83.059335°
Location Address:  3711 Woodward Ave, Detroit, Michigan, 48201
Orchestra Hall in Detroit, Michigan was constructed in 1919 by the Detroit Symphony Orchestra, and is said to be haunted by the spirit of a man named Ossip Gabrilowitsch, who served as the orchestra's founding director beginning in 1917. Since his death in 1936, guests and performers at Orchestra Hall have reported encountering the spirit of a man believed to be Mr. Gabrilowitsch. Security guards working at night also report hearing the sounds of disembodied voices and footsteps, and feeling sudden cold spots. Orchestra Hall was added to the National Register of Historic Places in April of 1971.

Coordinates:  42.434605°, -82.998524°
Location Address:  Strasburg Street, Detroit, Michigan, 48205
Often referred to as Knock-Knock Road by locals, Strasburg Street in Detroit, Michigan is said to be haunted by the spirit of a young girl who was hit by a car. Her vengeful ghost is believed to linger at the location of her death, forever searching for her killer who was never identified. Motorists dating back to the 1940's have reported encountering the young girl's apparition at night, waiting for drivers to stop at a stop sign before approaching the vehicle and tapping on the window. Those who witness the girl's spirit describe her as being pale, gaunt, and having dark, sunken eyes. After she is satisfied that her killer is not present, the girl allegedly disappears back into the night to search for her killer.

Coordinates:  42.332226°, -83.041465°
Location Address:  431 E. Congress Street, Detroit, Michigan, 48226
St. Andrew's Hall in Detroit, Michigan was constructed in 1908 by the St. Andrew's Society of Detroit, and now serves as an iconic lounge and concert venue. Those attending concerts in the building's basement area, known as The Shelter, have reported witnessing the apparitions of a number of unidentified men and women whose spirits remain at the location for unknown reasons.

​The Inn on Ferry Street

Coordinates:  42.361500°, -83.065600°
Location Address:  84 E. Ferry Street, Detroit, Michigan, 48202
The Inn on Ferry Street in Midtown, Detroit was constructed in the late 1800's as part of the Ferry Seed Company, and consists of six historic buildings. The Roehn House is said to be haunted by the spirit of a woman adorned in a long white gown, referred to as the lady in white, and those staying in Room 4102 of the Owen House often claim to encounter the spirit of an unknown man who is known to push, grab, or otherwise physically assault guests. Employees working at The Inn on Ferry Street have also reported experiencing sudden cold spots or temperature fluctuations, and feelings of being watched by an unseen entity.

Coordinates:  42.351443°, -83.060108°
Location Address:  4140 Woodward Ave, Detroit, Michigan, 48201
The Majestic Theater in Detroit, Michigan opened in April of 1915, and was renowned at the time of its construction as being the largest movie theater in the world. It was sold in 1984 and now serves as a popular music venue, which many claim is haunted by the spirit of a mysterious, unidentified man. Employees also report hearing the sounds of applause and disembodied shouts long after guests and performers have left for the night. The Majestic Theater was added to the National Register of Historic Places in 2008.

Coordinates:  42.426237°, -83.038904°
Location Address:  17897 Mt. Elliot Street, Detroit, Michigan, 48212
The Two Way Inn in Detroit was constructed in 1876 by one of Michigan's earliest pioneers, Philetus Norris, who came to the area in the mid-1800's and passed away in 1885. Over time the building was expanded, and served as the village jail, dance hall, and general store. Historical records indicate that the building was also used as a brothel and speakeasy during the American alcohol prohibition of the 1920's. Employees working at the Two Way Inn over the years have reported encountering the spirit of a man with a long white beard and a cowboy hat, believed to be Philetus Norris. Many of the inn's previous owners have also claimed to witness Mr. Norris' apparition in the adjoining apartment, or in other areas of the building.


​
​
Leave a comment below, submit your own scary story, or email a  picture, video, or EVP to be featured on GhostQuest.net!!